You’ve probably heard the term Metaverse being bandied about, especially since Mark Zuckerberg's announcement rebranding Facebook as Meta. But what is the Metaverse and what programming languages are often used to build it?

What is the Metaverse?

In simple terms, when we try to explain the Metaverse, it is a concept rather than a specific platform. It is the idea of a virtual online world, or collection of online spaces, that we can visit through virtual reality (VR) or augmented reality (AR), often with blockchain and cryptocurrency used to facilitate transactions.

These spaces will almost certainly be real-time and persistent, unlike many spaces we know from games. This means that events will happen in real-time and the space will continue to exist even when you’re not there.

Until very recently the Metaverse was limited to a few virtual worlds like Second Life and Entropia Universe but thanks to Mark Zuckerberg it’s now on the tip of everyone’s tongues.

The idea of the Metaverse is becoming more important as different elements of our lives move online. This has been hastened by the pandemic, where people have increasingly been forced to interact online through video conferencing and virtual meetings. Another factor that has enabled its arrival is the affordability of VR headsets, which used to be a toy for the wealthy but are rapidly coming down in price. 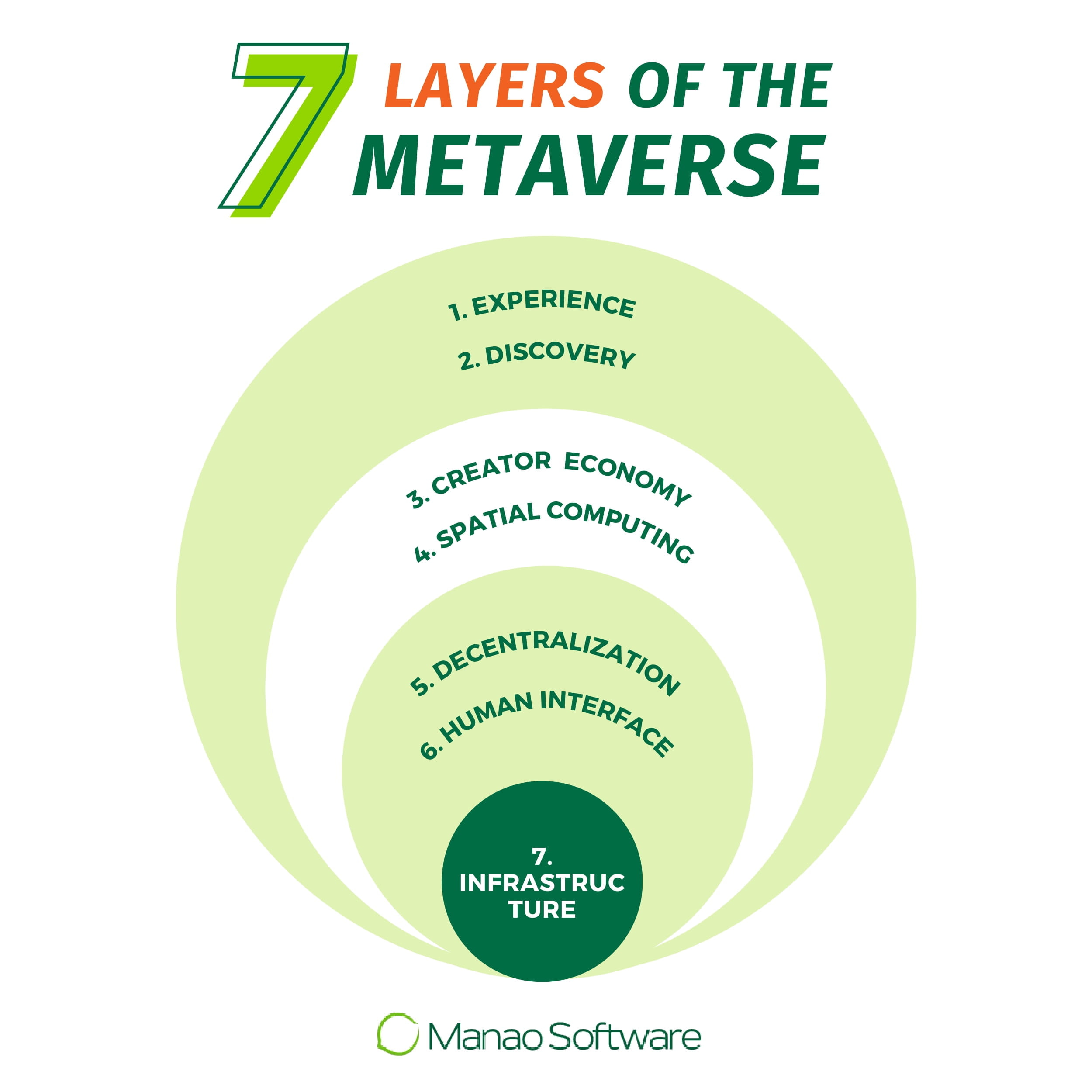 How does the Metaverse work?

The Metaverse works in a variety of ways, combining elements of AR and VR supported by video and blockchain, whether through the exchange of NFTs or using cryptocurrency in the virtual worlds. Depending on the type of applications a Metaverse “space” is used for, various technologies will need to be deployed with varying levels of security and privacy but generally, 3D design and AI will be used, along with other web or gaming technologies.

Metaverse “spaces” can be used for a wide range of applications from studying to playing and working to trading. Employees can be trained in virtual spaces, children can go on virtual field trips, and of course, gamers can play truly immersive 3D games in virtual worlds. NFTs and other virtual assets can be traded or purchased and people will attend virtual festivals or events.

What Technologies Make a Metaverse

While there are many companies and platforms vying to be the number one Metaverse platform, two of the more popular Metaverse development tools or platforms are Unity and Unreal, both of which are 3D game development engines. In fact, you’ll see many job descriptions asking for experience with one or both of these platforms. 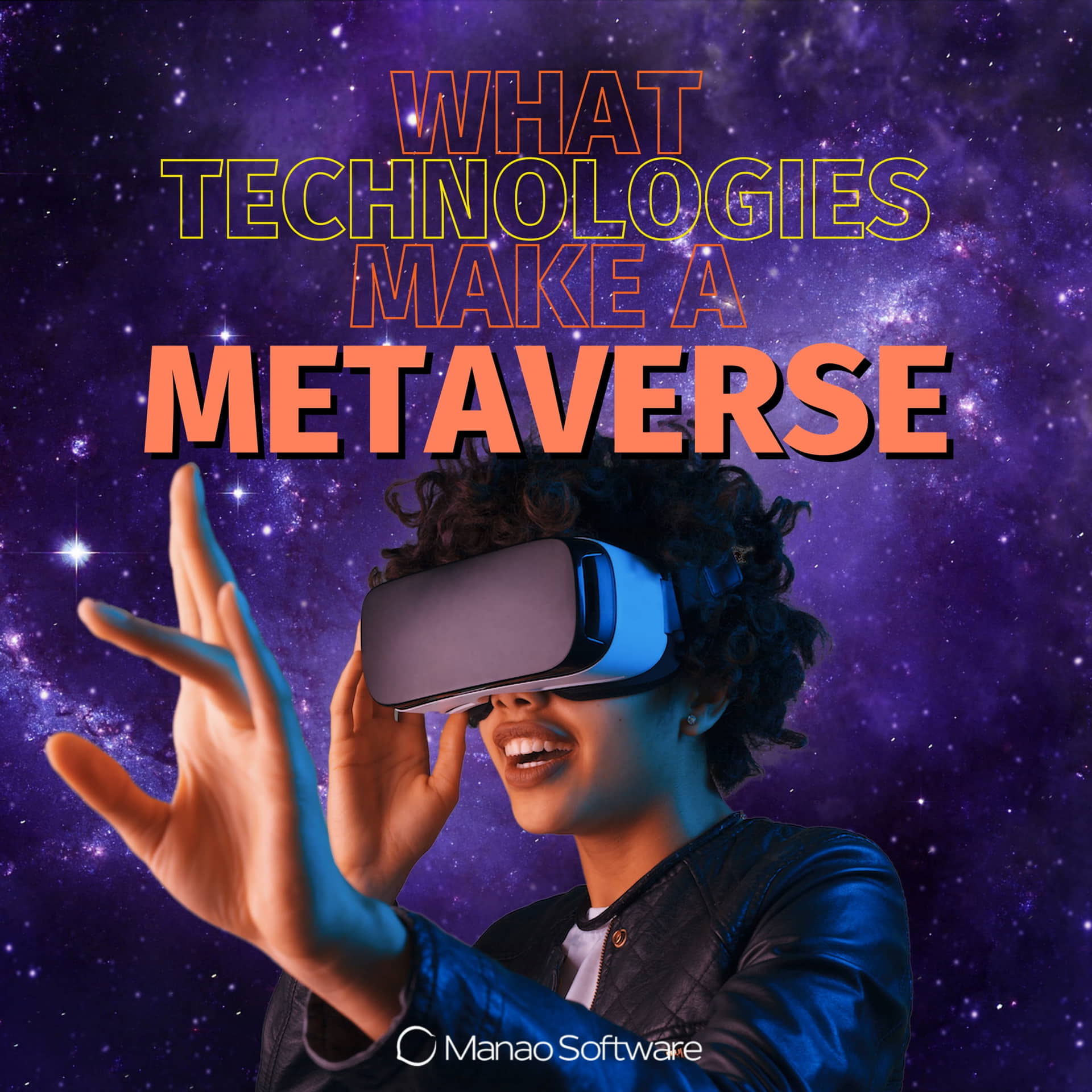 Unity is a VR-focused development platform that uses the C# language to help quickly and easily design, develop and launch 3D games. This makes it a very popular choice for the Metaverse developer, and it is used by many big games development companies as well as smaller indie developers and hobbyists.

Unreal is another very popular 3D development engine, owned by Epic. Unlike Unity, it uses C++, which some people believe to be faster and more powerful than C#. It’s another great choice for developers wanting to build virtual environments and worlds.

What the Metaverse Means for Developers

As there are so many different Metaverse applications there is no definitive answer to the question “what is metaverse technology? We can say though, that for developers, the Metaverse means that they need to brush up on skills related to AR, VR, and blockchain. They might also want to consider AI, and having creativity is also a must. This may mean learning several new programming languages to get a broad skillset and overview of Metaverse programming, or it may mean focussing on one area, for example, blockchain, and becoming an expert in one or two relevant languages. 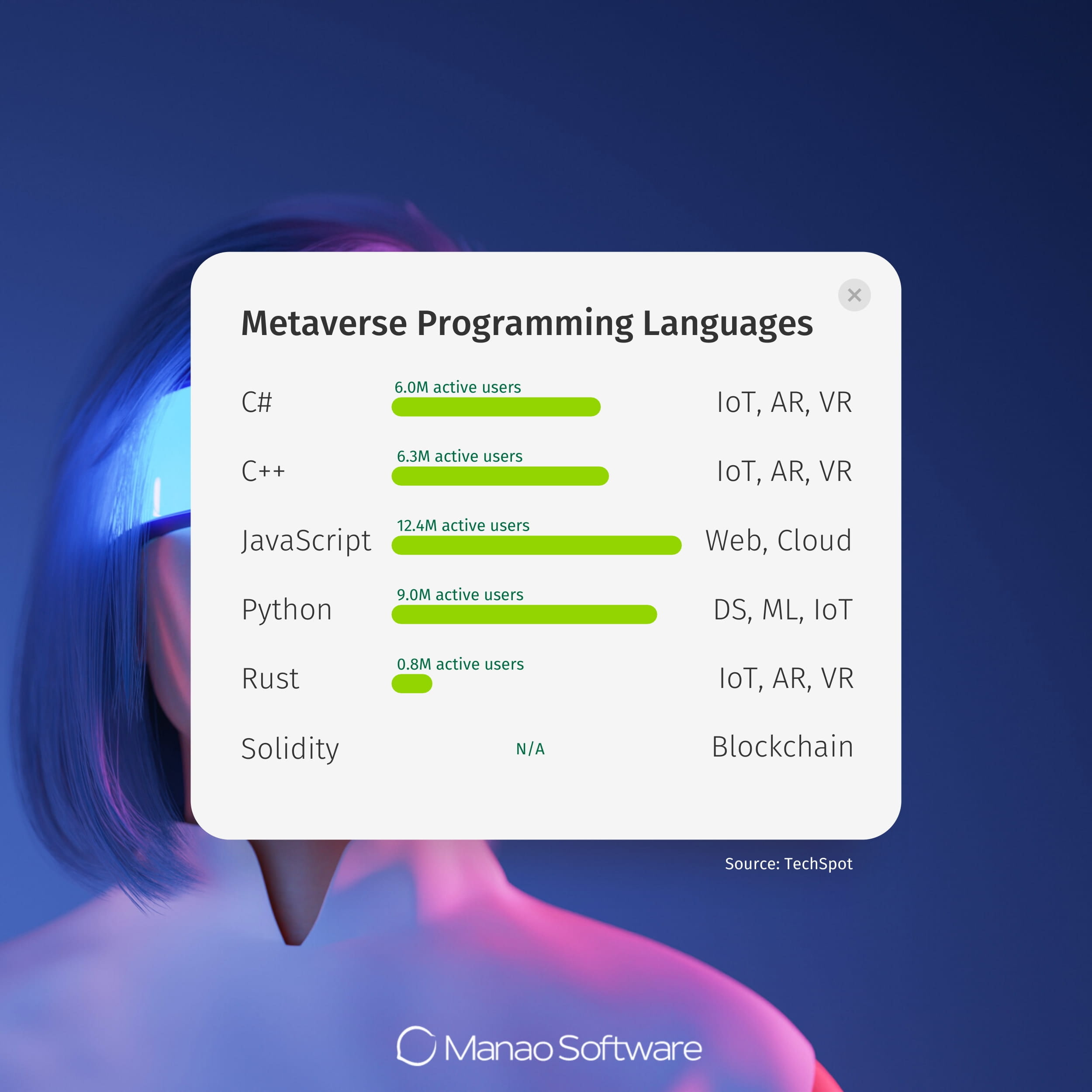 C# has been around since 2000, which may make it seem outdated, but it’s the backbone of many VR development platforms. For example, it’s the primary coding language for the Unity platform and one of the most popular languages for blockchain. This means that some people say it’s the best language for game development as well as for developing many different types of Metaverse apps.

Epic’s Unreal platform makes use of C++ and it’s also widely used in blockchain development. This makes C++ another great object-oriented language for Metaverse developers to learn. And like C#, C++ has many applications outside of Metaverse, making it a useful skill for all developers.

JavaScript is one of the cornerstones of internet programming and is used in both Web 2.0 and Web 3.0 development, making it relevant for many Metaverse use cases. In fact, some people call it the best coding language for games. While this language is easy to learn, the complexity of its class functions makes it complex and powerful. With its ubiquity online it’s a great tool for any programmer to have in their toolbox.

Python is an open-source programming language with a large following, which helps ensure the language is future-proofed. It’s used a lot in VR and AR development, so is a valuable tool for Metaverse programmers.

With blockchain being a key component of many Metaverse applications, Rust is a good choice for programmers looking to develop in this field. It focuses on performance and security and is used for cryptocurrency development, including the Solana blockchain. Rust has a similar syntax to C++ while being open-source.

Solidity is another language that focuses on blockchain development, as it was designed for the Ethereum blockchain. This makes it another useful tool for developers who want to focus on the blockchain element of the Metaverse.

Final Thoughts on Programming for the Metaverse

As you can see, when developing Metaverse spaces or apps for the Metaverse a broad range of skillsets comes in handy. Having a good understanding of at least a couple of the top programming languages along with a creative mindset will stand you in good stead to step into the world of Metaverse technology.

At Manao Software we have a long history of developing innovative web apps and are excited to help our customers expand their presence into the Metaverse. With our creative thinking and broad range of programming skills, we will step into this brave new virtual world together. Contact us to discuss your Metaverse ambitions.