When developing a web app, one of the first technical decisions to be made is which JavaScript ecosystem to use. While there are many to choose from, the most popular are Angular and React.

Both have been around for many years and are widely adopted and supported, and each has its own advantages and disadvantages. Choosing between React vs Angular is generally down to a combination of the development team or client’s preference and the project specifications.

Angular is a fully-fledged MVC (Model-View-Controller) framework with everything you need to develop your JavaScript app in one place while also giving you a strong structure. It’s open-source and was developed by Google initially in 2010, although it underwent a major overhaul in 2016 in response to the popularity of React, amongst other things.

In answer to the question, ‘what is angular used for?’ it’s very popular for large and complex single-page enterprise web apps. In fact, it’s used by a lot of major global players, including, unsurprisingly, Google. The list also includes Microsoft, IBM, PayPal, and Samsung.

Pros and Cons of Angular 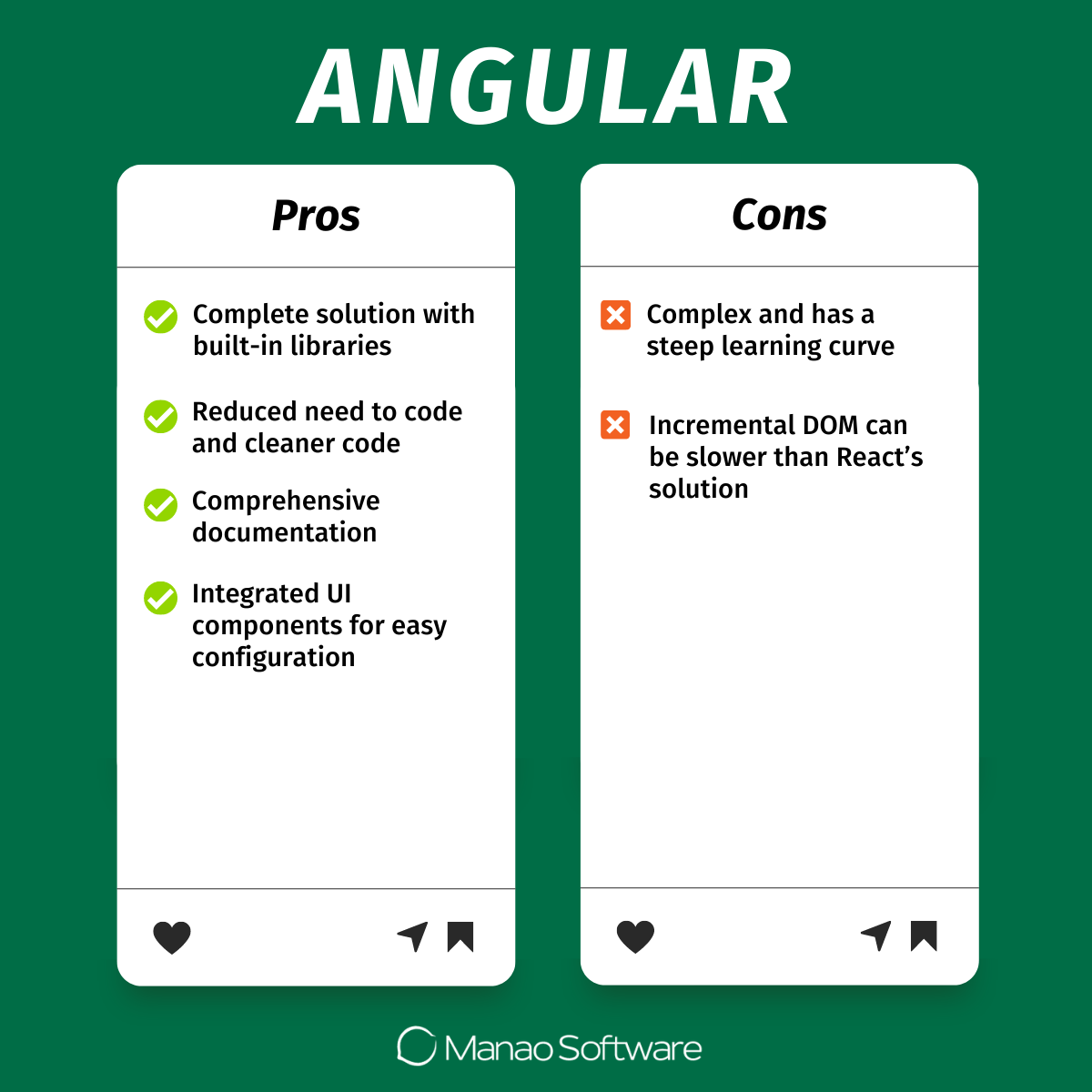 React was developed by Facebook in 2012 using a concept called component-based architecture, and was made open-source in 2013.  While many people wonder is React a framework or library, it’s a library in contrast to Angular being a framework. But like Angular, React is used by many of the big players in the tech industry today, including of course Facebook and Instagram, as well as Yahoo, Netflix, and Dropbox.

Similar to Angular, the decision when to use React covers a wide range of situations including a wide range of web apps. React can be useful if you have to get an app up in a shorter amount of time and don’t know how to use Angular.

Pros and Cons of React 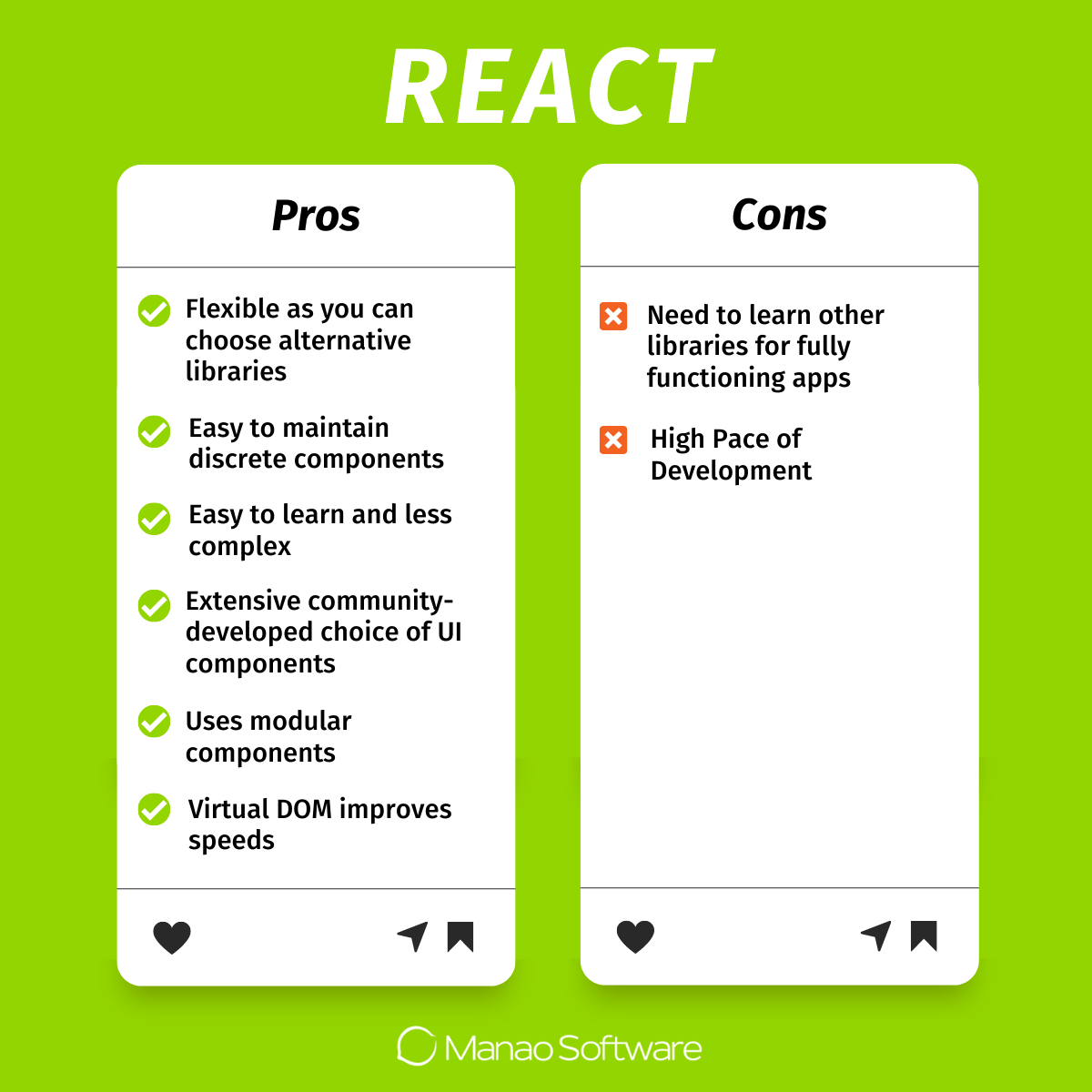 Angular vs React: What’s the Difference?

Probably the key difference between angular and react is that Angular is a framework, while React is a library. This difference can be both a benefit and a drawback depending on your expertise and project specifications.

You might be wondering what the difference between library and framework actually is. When thinking of a framework vs library a framework has pretty much everything built-in ready for you to build complex apps, and gives you a structure to follow. Libraries contain ready-to-use code and, in the case of React, really focus on the view aspect of MVC architecture only. This means that other libraries will need to be used to fully implement your architecture, which can be both an advantage and disadvantage. 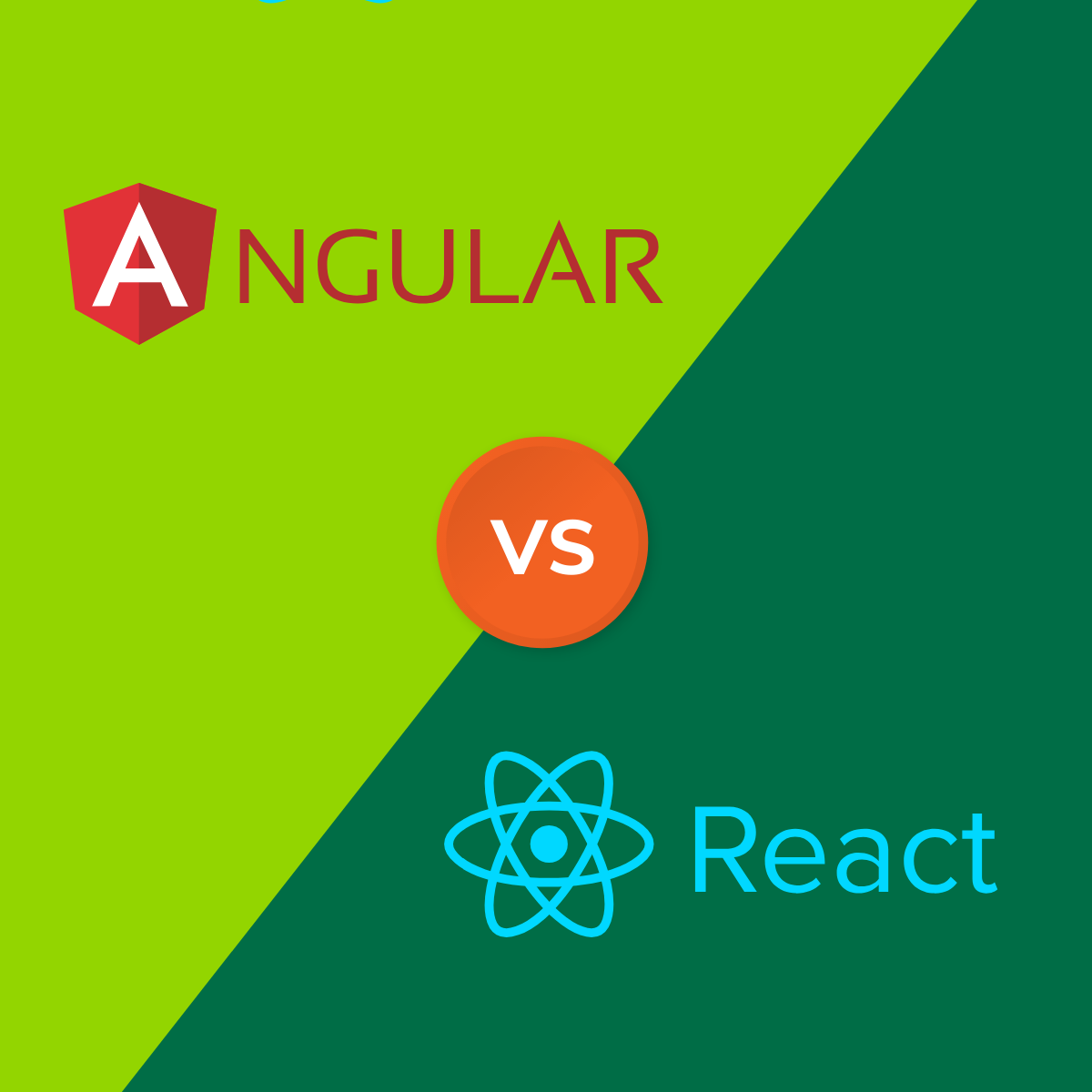 Generally, the way React works gives it a slight performance edge over Angular, but in practice, this is often very minimal.

The learning curve for React is usually quicker than Angular, although when using React you also have to factor in learning other libraries too, in order to implement a full MVC architecture.

Looking at React vs Angular, both are very popular and well-supported with large online communities. When looking at the numbers React is now overtaking Angular in popularity on many online forums such as Github, but even though it is leading the way this does not make Angular a bad choice.

The online support ecosystems for both are solid and finding the answer to any issue you might have will be easy in either case.

React vs Angular: Which to Choose for Web Development?

When deciding whether to use react for web development or take the path of angular web development the decision is not so straightforward. Both offer a wide range of features and are flexible, easy to update, and offer great performance. If your development team is more familiar with one ecosystem or has a preference for one or the other, that might be the best way to make a decision.

If SEO is of key concern to you or if you are developing something very quickly, React might be the better choice, down to its server-side rendering and quick learning curve.

If you are developing a cross-platform app you might decide to lean towards Angular as it is very efficient in this area. Angular also works well with very large apps with lots of code as it is very easy to maintain.

At Manao Software we have development teams who are experts in both React and Angular and can work with you to decide which is best suited for your project. Contact us now to discuss your specific needs.