What is a Super App? How do Super Apps Work?

You’ve probably heard the term super app bandied about but do you know exactly what it is and if you need one, or need to be part of one? We’ve got the lowdown on the latest direction in app development and what it means for you.

What is a Super App?

If you’re wondering exactly what a super app is, the definition is rather broad. Basically, it’s an app that has additional functionality and services on top of its main purpose. At the moment the biggest and most complex super apps are in Asia but this trend is becoming increasingly prevalent in Europe and the US.

The best way to describe a super app is with a short overview of the grandfather of them all - WeChat. This Chinese app started out pretty simply, as a messaging app, but over time more and more features have been added. It has now incorporated banking features, online shopping, gaming, travel booking, business networking, booking government appointments, making reservations, and much more.

With all these features WeChat now has more than 1.2 billion users, most of them in China. 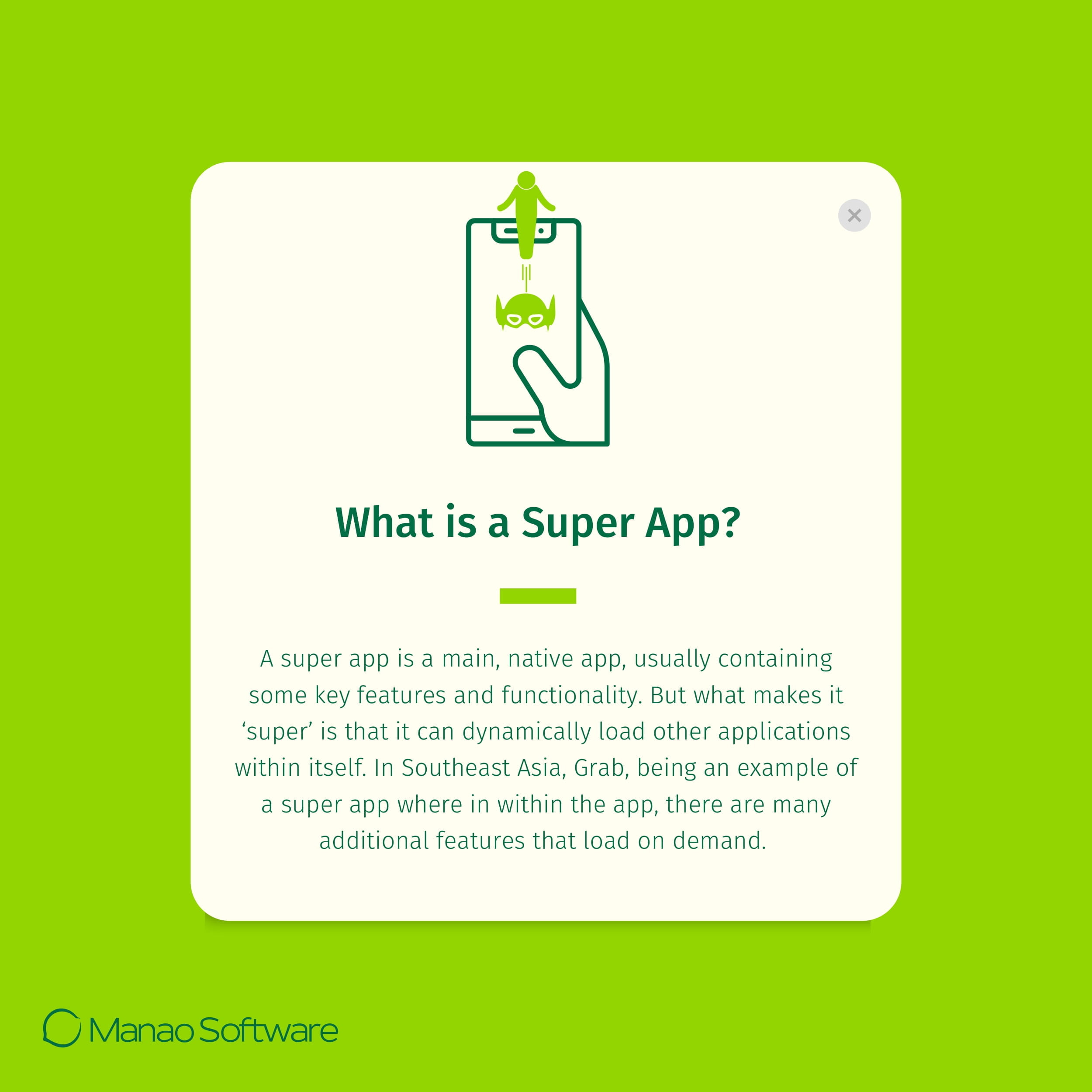 How do Super Apps Work?

Without getting too technical, a super app is a main, native app, usually containing some key features and functionality. But what makes it ‘super’ is that it can dynamically load other applications within itself. These mini applications will fulfil the roles of other apps that a user might have on their phone, all the while keeping the user in the walled garden of the super application.

So for example, in Southeast Asia, the Singaporean company Grab began as a ride-hailing service, similar to Uber. But now, when a user opens the main Grab app (recently renamed Grab Superapp) they are directed to the main menu listing transport as just one option. Within the app, there are many additional features that load on demand. So if a user wants to use the Grab food delivery feature to order their dinner, that ‘mini app’ will load within the main framework of the Grab app. The app also offers mobile payment services, similar to Apple Pay, courier and delivery services, and insurance products, to name a few.

For the end user, this all should be a fairly seamless experience. While it might take a few milliseconds or so to load the additional features the aim is for them to feel like they are still in the main app. 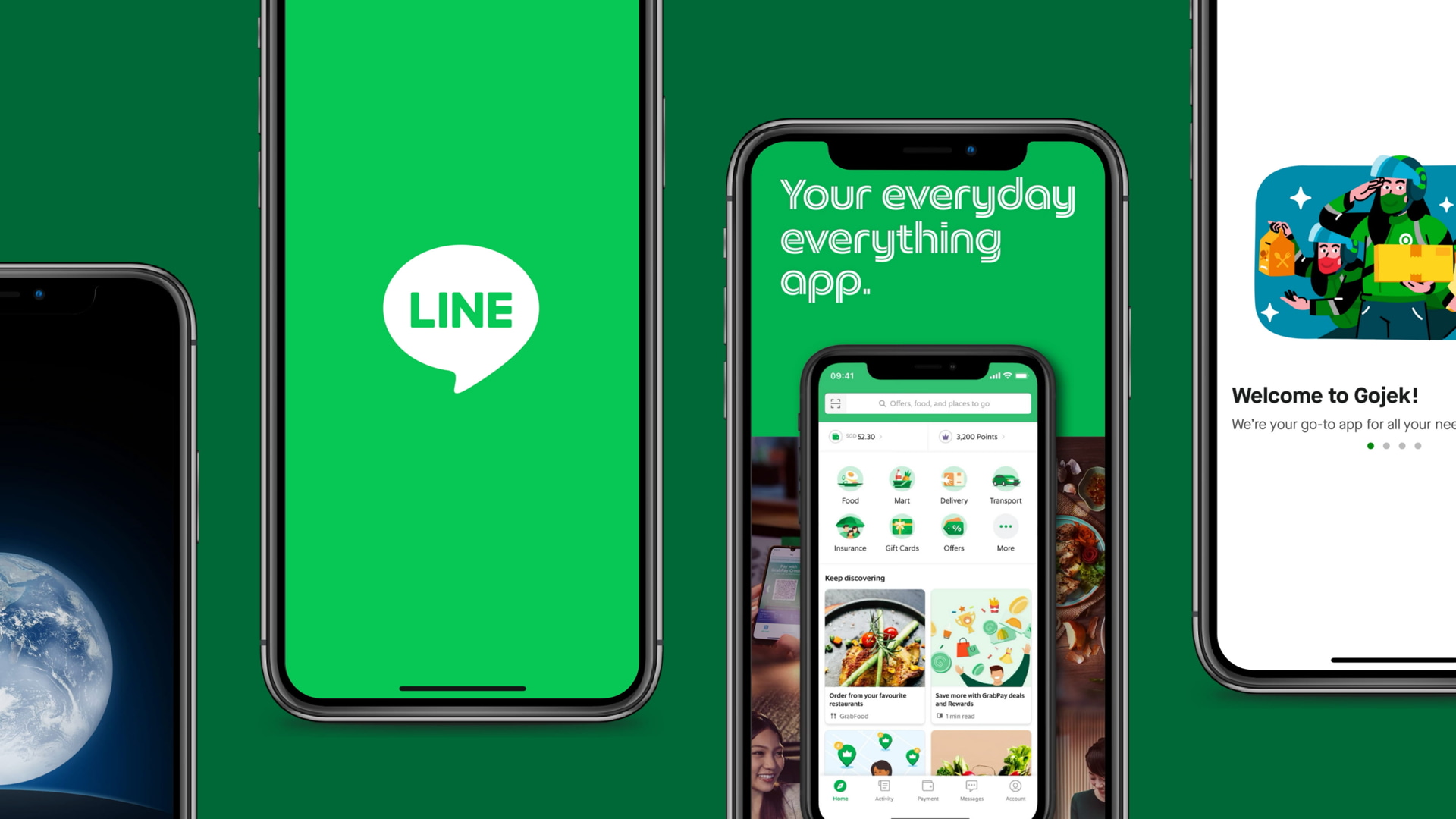 As we mentioned above, within a super app there will be many other smaller apps, and these are called mini apps. In general, all these mini apps will be completely owned and managed by the same company as the super app, as we discussed above, but this is not always the case.

For example, the Japanese messaging app, Line, which is popular across Asia, offers small businesses the opportunity to develop their own mini app within the Line super app framework. This gives the small businesses the advantages of being part of a trusted framework and allows them to use some of the features of the main app, such as messaging, while still having their own functionality within the mini app.

These mini apps have other benefits too. From a technical point of view, they are quicker and cheaper to develop than a stand-alone app, and the experience is often smoother for the end user too. As they run on the super app platform these mini apps never need to be downloaded separately or updated in the app store, making them more convenient.

As with any new technology, there are both benefits and challenges, and this is true for super apps.

For consumers there are several key benefits of using super apps: 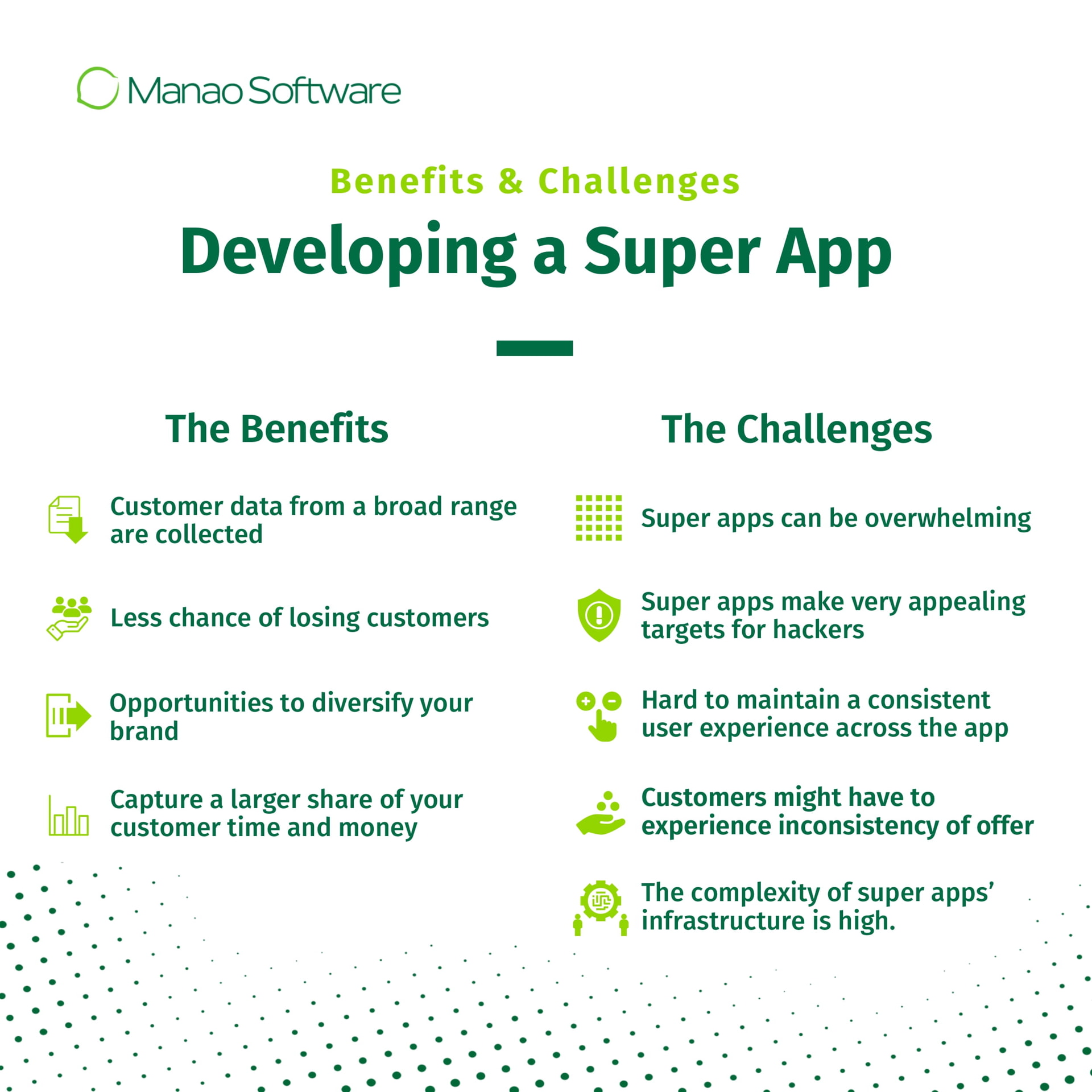 While there are many benefits to using a super app, there are also some potential challenges, both from a technical and an adoption standpoint.

Business and development and questions

When developing a super app there are several key challenges that business development teams and software developers must face, in order to make a functional, coherent, and secure super app:

What about the US and Europe?

While super apps are booming in Asia they have been comparatively slow to get off the ground in the US and Europe. While some might say that Facebook is a super app, they have actually gone in the opposite direction with some features - removing the messaging functionality of their app to a separate, stand-alone app.

There are many discussions over why super apps are not yet flourishing in the west, as they are in Asia. These arguments range from the already broad marketplace in the west with many competing apps, to the need for more streamlined apps in Asia due to lower-powered mobile devices, but that seems to be changing. Many of the popular western social media platforms, like Facebook and Snapchat, have added extra features to their apps, including shopping features, charity donations, and mini-games, and Elon Musk is talking about how he wants to turn Twitter into a super app. 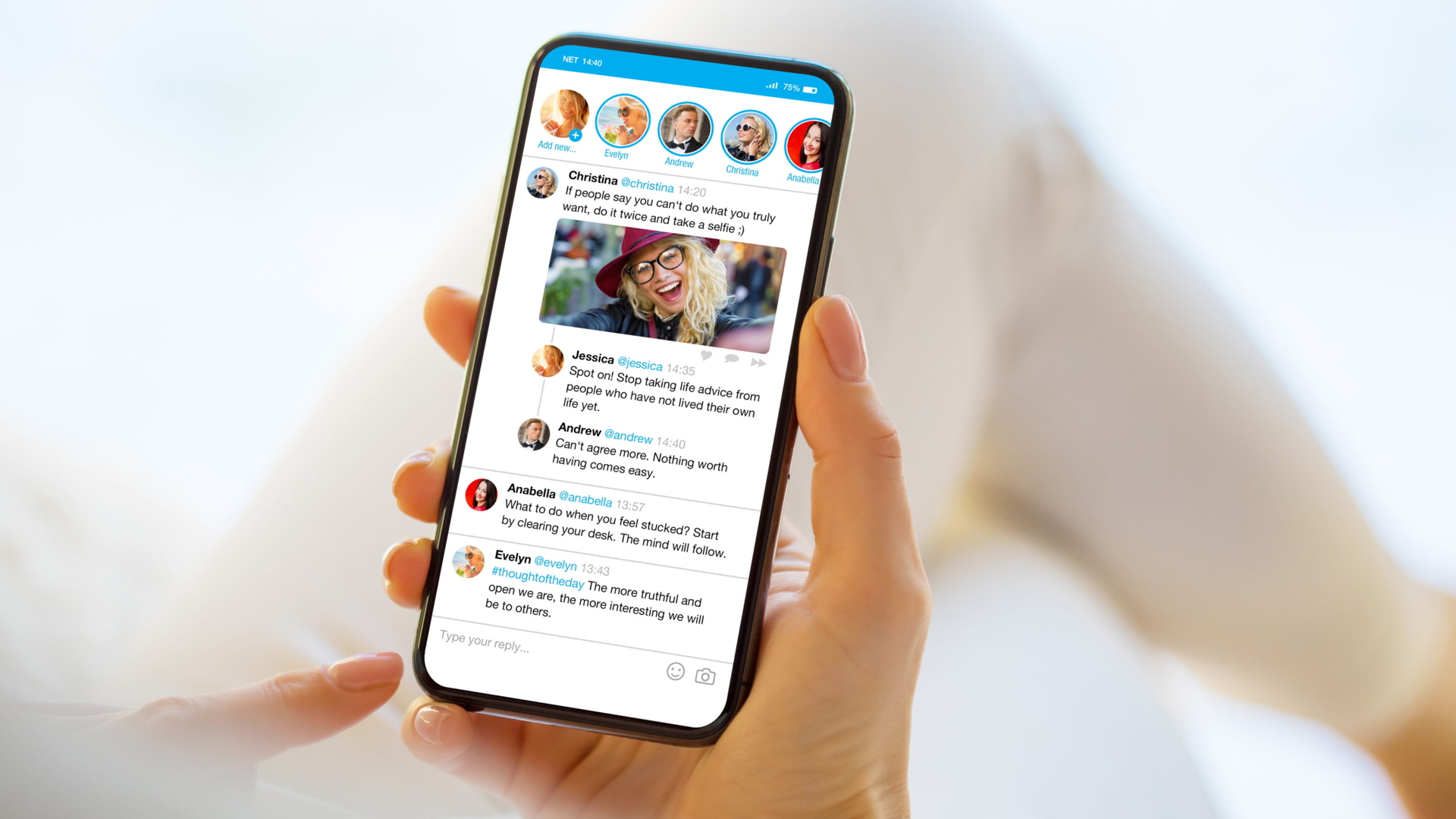 Another reason for caution in the west could be to do with regulation, which, particularly in Europe, is hard on monopolies and is very strict about data privacy, sharing and security. However, with the recent changes to how giants like Facebook can track users away from their platforms, the urge to keep people within their walled garden is now probably stronger.

At the moment super apps are most popular in Asia, however, there are a few other super apps around the world. We’ve mentioned a few already, but here are some additional examples of super apps: 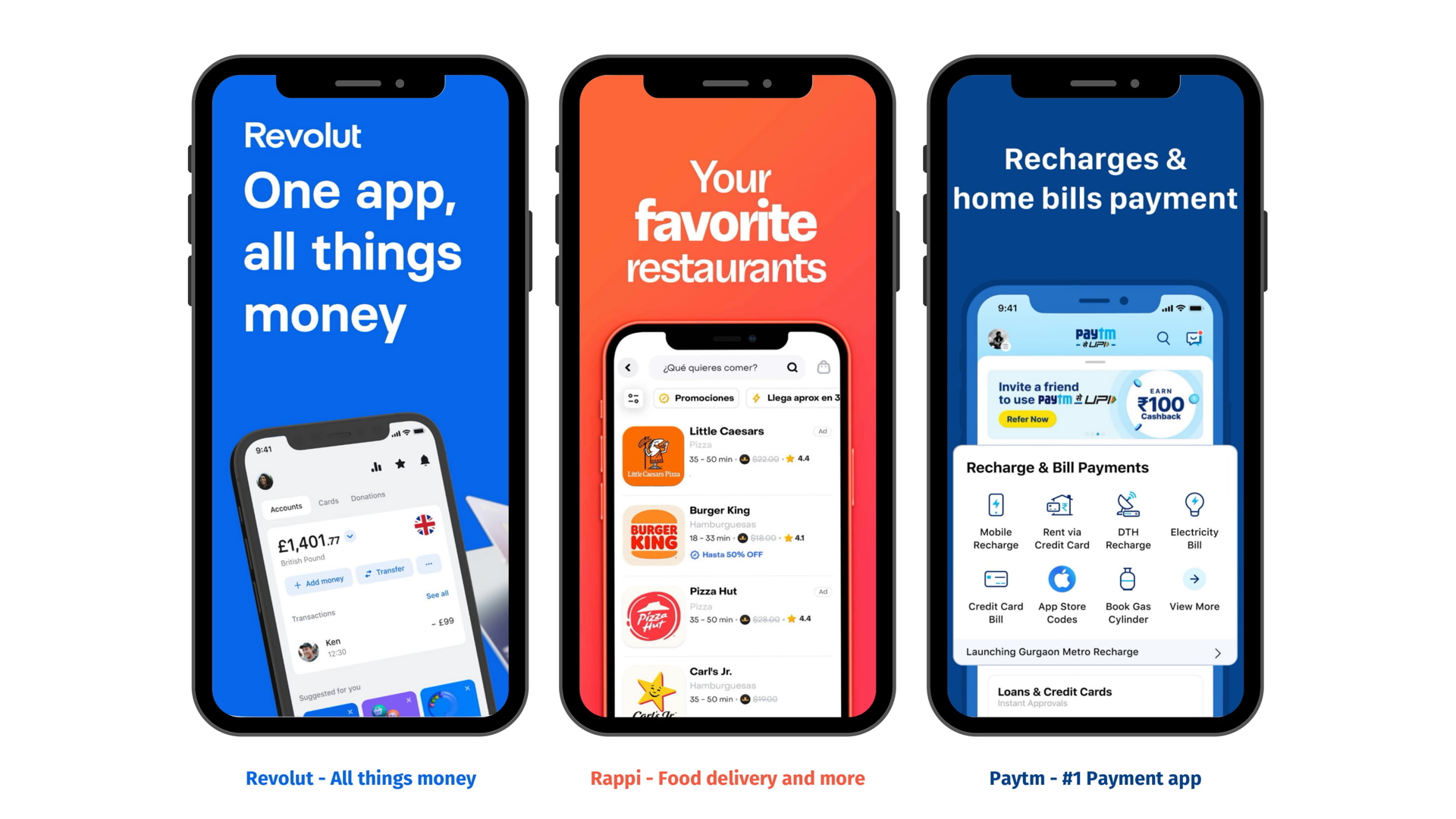 The Future of Super Apps

While we don’t have a crystal ball, it seems unlikely that super apps will go away soon, but their uptake may continue to be slower in the US and Europe, as recently argued in Forbes. However, in Asia and South America, their popularity is growing, with more features being added, seemingly, every day.

Only time will tell if consumers get sick of these, potentially, bloated apps, or if developers can work out a way to manage the user experience in an app with hundreds, if not thousands of different features. But it seems like this trend is set to continue for a while at least.

While super apps don’t seem to be going anyway, whether they are right for your business and customers is another question. This is more about business strategy than technical possibilities, and ensuring your super app has a consistent offering, in line with your brand, not just a hodgepodge of random services.

Some questions you should ask yourself when considering a super app are:

At Manao Software we’re experts in mobile and web app development, with over 15 years of experience in the changing app landscape. We would be happy to discuss your super or mini app development plans and help you work out exactly what you and your business need. 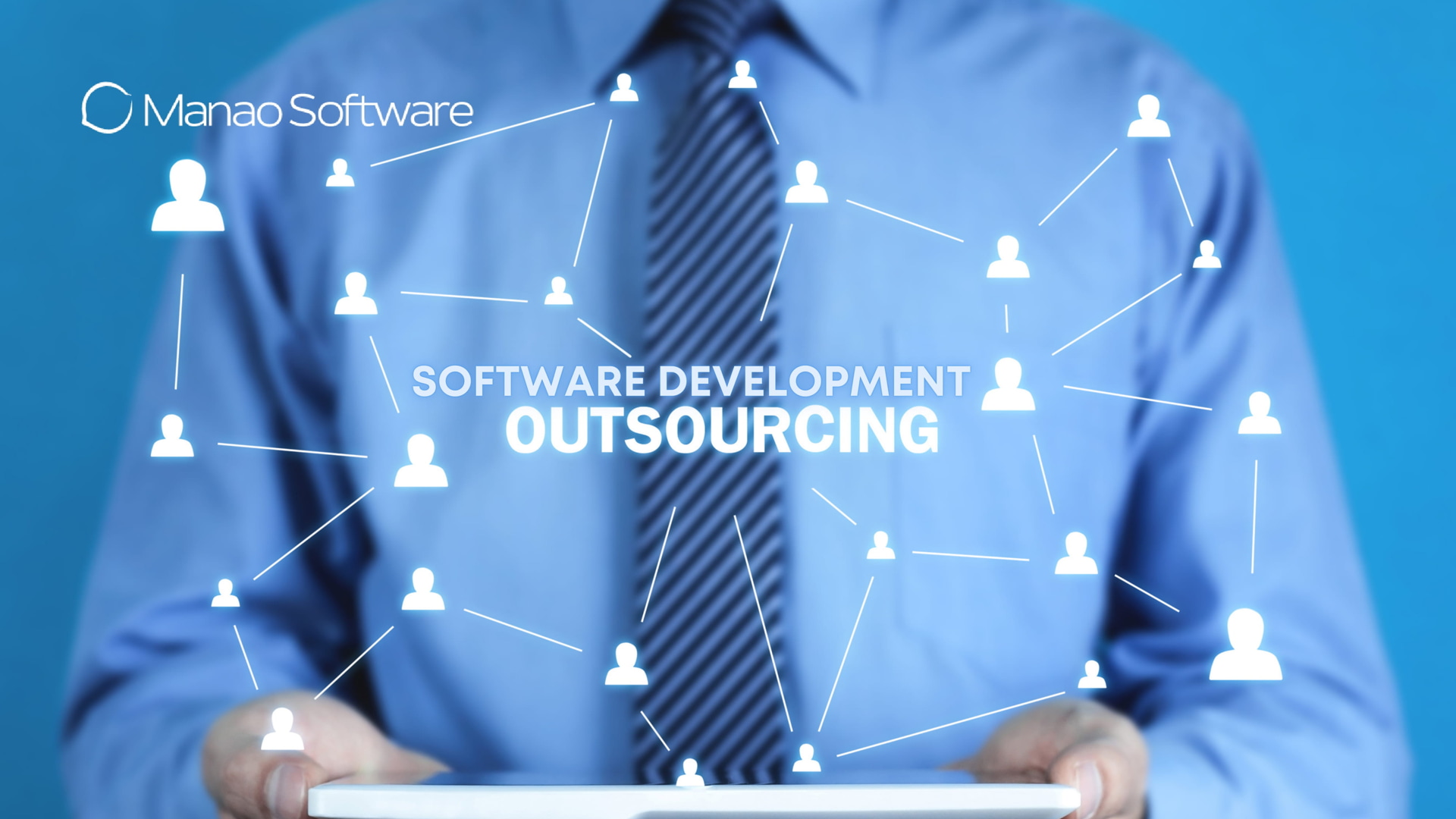 How to Hire an Outsourced Software Development Team 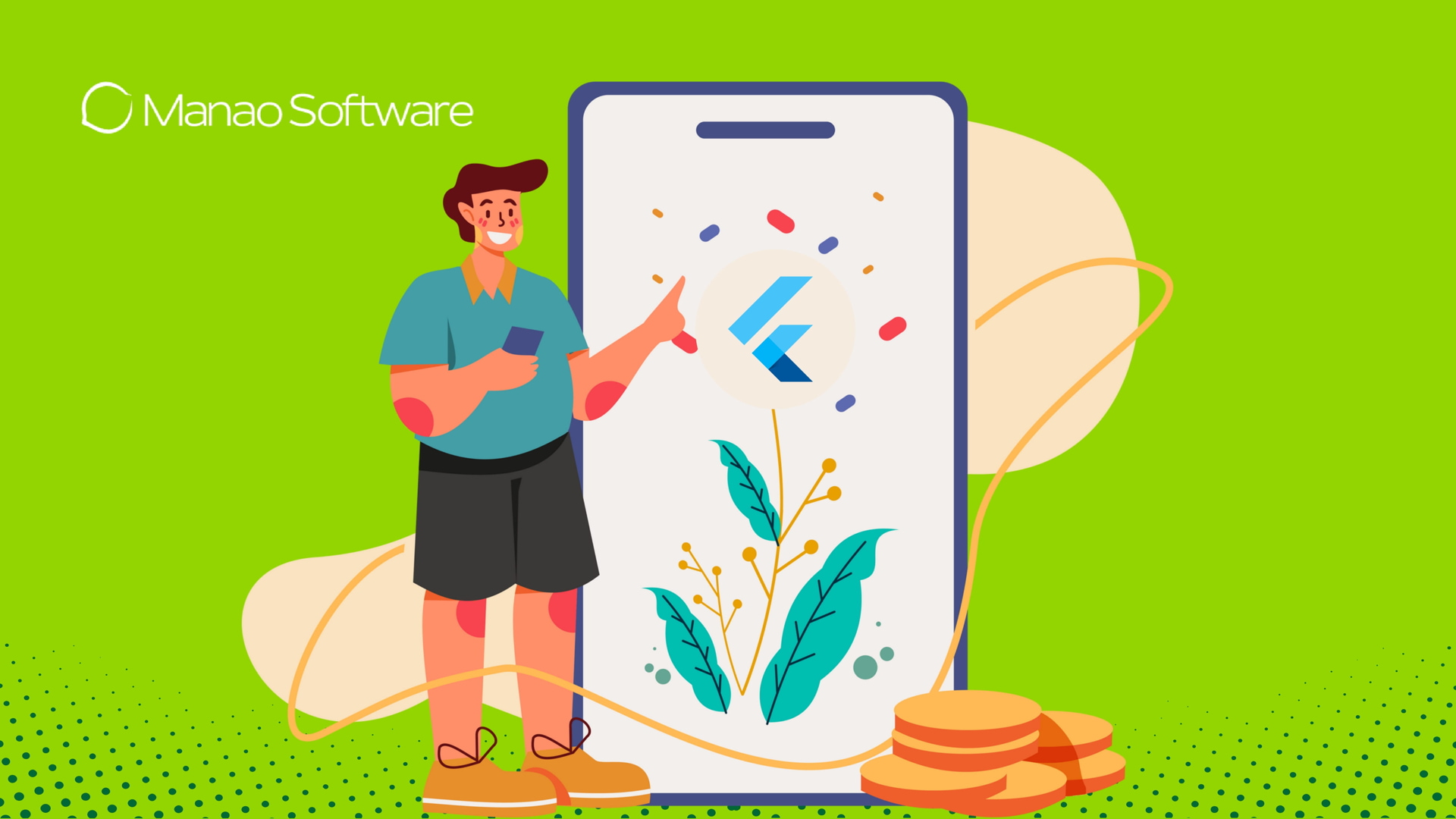 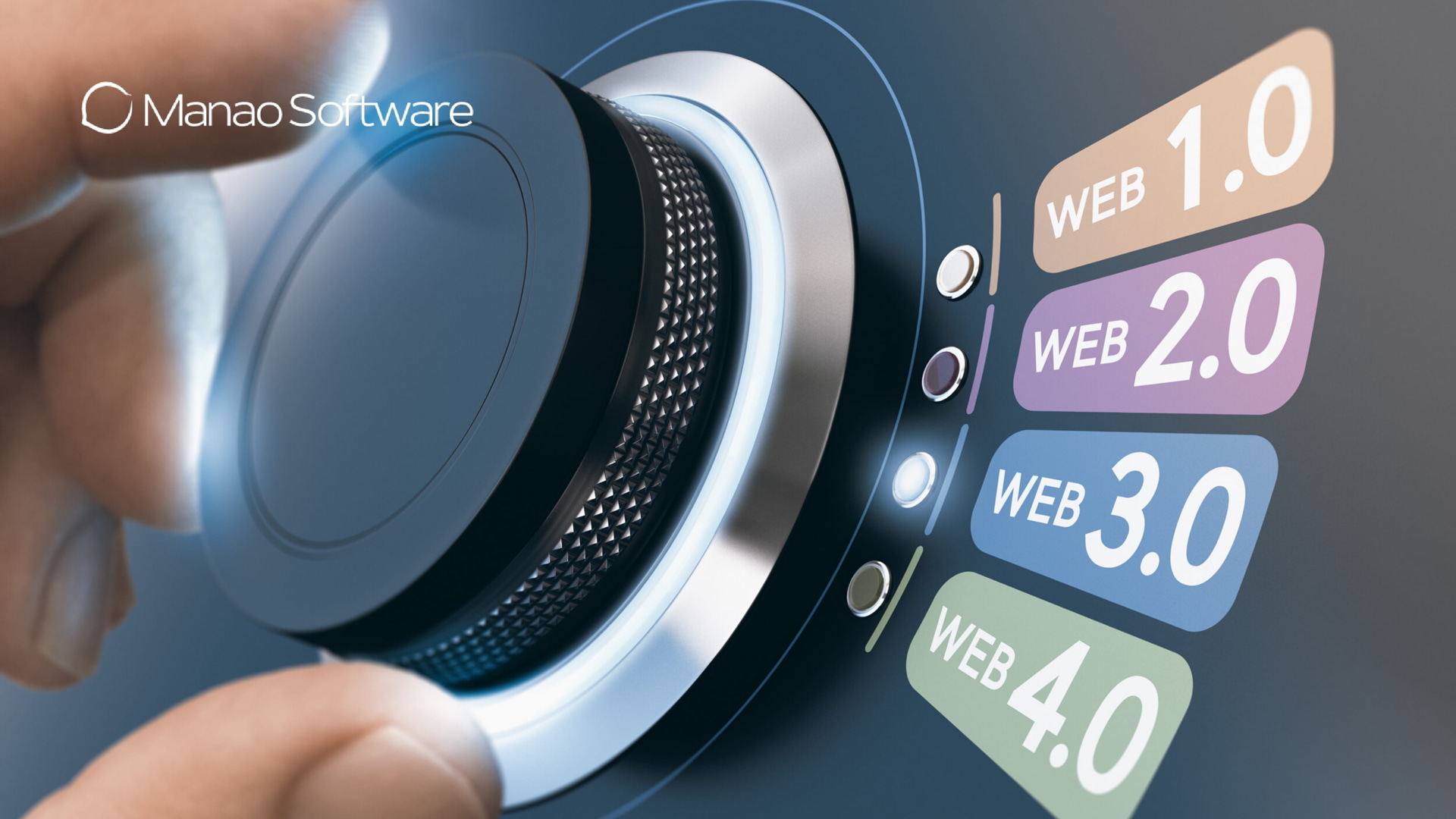